The year I was ten years old I received a woodburning kit for Christmas. I had never seen one before and my parents had to explain how to use it. I’m pretty sure it got plugged in right after breakfast.

The tool was an unwieldy thing in the hands of a child, although in my mother’s it had looked easy. The hot tip of the tool came with different attachments (as show on the box cover above), and each made a different shape: a circle, an X, a fine line, and so on. The only problem is, the small tool provided for changing tips didn’t fasten then very securely so they were always coming off. But when things went well, it was a lot of fun.

The pieces of wood provided with the kit were the exact ones shown above. The idea was to use the hot tool to scorch the orange areas, turning the wood into a genuine, hand-burned picture. I was not good at this. 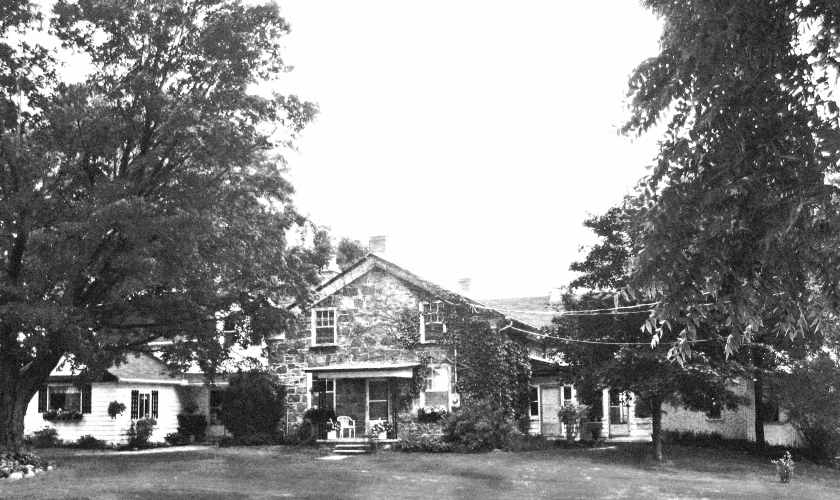 Back in those days we always had an extended family gathering on Christmas Day. Because I lived in a large farmhouse with three separate attached homes, we didn’t have to travel far for our Christmas dinner. My family lived in the stone house in the middle. My grandparents lived in the wing on the left, and my Great-Aunt Ada lived on the right.

Christmas morning was always a bustle in Granny’s side of the house as she prepared food for the rest of the family who descended around noon. Her windows would be steamy with all of the cooking: a turkey, as big as an ostrich, in the oven, a huge pot of potatoes, squash, turnip, peas, dressing, cranberries, gravy … oh my!

We kids would wander back and forth, from our house to hers, through the door that joined the two. But as the cooking ramped up, we knew to stay out of the kitchen. Finally the others would arrive, stomping snow off their boots, shouting “Merry Christmas”, and handing over plates of cookies and desserts to be kept safe until later. They also brought gifts that I helped to pile beneath the tree, surreptitiously searching for my name on one of the packages.

After the feasting was over, and after the dishes were done (by hand), it was time for gift-giving. While my parents always made a very nice Christmas for us, our gifts were quite modest compared to some. Something extra from the family gift-exchange was a very exciting prospect.

As presents were opened, there was plenty of laughter, and oo-ing and ah-ing. But then something terrible happened.Through someone’s forgetfulness or oversight, there was no gift for my Aunt Myrna. I knew how I would have felt without a gift and I could only imagine she felt the same, or maybe even worse.

I slipped over to our house, plugged in my woodburning tool, and willed it to heat up quickly. I know I rushed through burning the smallest picture in the kit, trying to make it look pretty, but going as fast as I could. I can still smell the burning wood and my eyes feel the sting of the small plume of smoke that rose from where the tool touched the pattern. Finally, finally, I felt it was good enough and I wrapped it as well as I could. Back at Granny’s house, I snuck over to the tree and pretended to find the small gift way back in the corner.

I don’t remember Aunt Myrna’s reaction or what anyone else had to say about my miraculous find. I only remember the wonderful feeling of righting that wrong and giving a gift to someone who had missed out on the fun.

2 thoughts on “THE GIFT OF A CHILD”