A Facebook friend recently mentioned trying to help a snapping turtle cross the road and it brought back a memory. The only snapping turtle I’ve ever had the dubious pleasure of meeting didn’t want anyone’s help at all.

On a Friday afternoon when I was nine or ten years old, someone made a startling discovery. A huge old snapping turtle had come to our house, presumably from the farm pond that was a good quarter kilometer away. After crossing the yard, he’d somehow managed to fall into one of the concrete-surrounded window wells near my Granny’s kitchen, in the multi-family farmhouse where we lived. 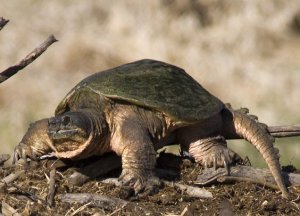 My sisters and I gathered around, gazing with delicious horror at the prehistoric-looking thing three feet below. The turtle’s neck seemed extra-long as he strained toward us, his pointy mouth wide open. If we so much as made a moved, he hissed.

Over supper, our parents explained that the turtle was much more frightened of us than we were of him. That was hard to believe because I couldn’t imagine getting anywhere near such a fearsome thing. I don’t remember exactly how it happened, but before the meal was over, one of us (probably me) decided to capitalize on the poor fellow’s misfortune.

Friday night at the farm was the night before market, and we knew that a number of relatives and friends would be coming to bring things for us to sell in the city the next day. Right after supper I got a big piece of cardboard and made a sign:

Dad helped us nail it to a stick which we drove into the ground near the snapping turtle’s prison.

Of course everyone wanted to see the turtle, and the sign clearly stated “five cents a look”. We were ruthless. If someone and their four children wanted to take a peek, it was going to cost a whole quarter. If an individual didn’t have a nickel in their pocket and we didn’t have the change, the fee was happily bumped up to a dime. All in all, my mother recalls that we made a few dollars that evening.

However, like many small businesses run by inexperienced entrepreneurs, our cash flow came to an abrupt end when someone, far more experienced than we, engineered a takeover. Actually, it was more like a “take out”.

Later in the evening, after the entertainment had waned, there was a lively discussion about how to get the vicious old turtle out of the window well. A vote was taken, and my uncle volunteered to stick a wooden broomstick in front of his pointy beak. That snapper grabbed on tight. He didn’t even let go as he was lifted out of the hole and set down on solid ground. Everyone stepped back, afraid of what he’d do, but he just raised his nose into the air, checked out the evening breeze, and then headed across the lawn toward the pond.

We all stood watching as that old turtle’s north end headed south, and that was the end of the him. That was also the end of our first business venture.

2 thoughts on “A Snapping Turtle’s Fall”