Last Sunday afternoon my motherly duties included attending a concert put on by a group that Andrew attends. “Friends Group” meets every Wednesday evening at the local United Church, and is the highlight of Andrew’s social life. 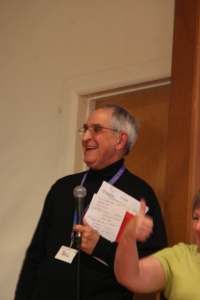 The group is led by “retired” Pastor Bill, a literal bundle of enthusiasm and energy. When this Handi-capable gang meets they sing, listen to stories which are followed by discussion, and then they enjoy a snack. It’s so popular that participants come from quite a distance. They arrive with staff or a family member, but not Andrew.

Although a staff member drives others from his house to the meetings, Andrew won’t have any part of it. He has a big wagon that he uses to deliver papers, and each Wednesday evening he loads his electric guitar and little amplifier into the wagon, then makes the fifteen minute walk to the church. When he arrives he sets up and “tunes” his guitar before the others get there. Although he’s tone deaf, has no sense of rhythm, and wouldn’t recognize a music note if one walked up and introduced itself, when the singing starts he plays like there’s no tomorrow.

Each spring, the Friends Group puts on a concert like the one I was at on Sunday. Attended by over one hundred people it’s quite a rollicking affair. This year the 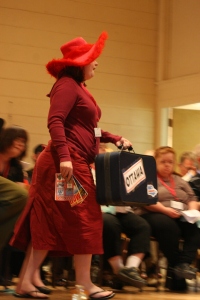 participants acted out skits according to their abilities, while volunteers narrated. After each skit the audience was invited to sing a song, following words projected on the wall. In front of the stage, in the “orchestra pit”, there was an honest-to-goodness band, and tambourines, maracas, and bells were played by an enthusiastic group of musicians. One maraca player was even inspired to put down his instrument and do an impromptu dance partway through.

Unnoticed by most, Andrew stood near the piano with his 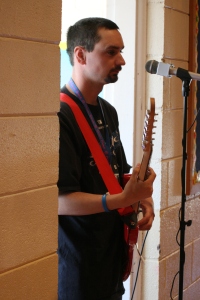 guitar. He held it and played it like a bass guitar and I’m sure he felt like the biggest rock star in the world.

After the concert, several of the volunteers told me how much Andrew has changed since he joined the group about eighteen months ago. How he’s more at ease and has become more outgoing. They said they appreciate his eagerness to use his physical abilities to help out when he can. One woman told me that Andrew has even begun attending their weekday morning knitting group! 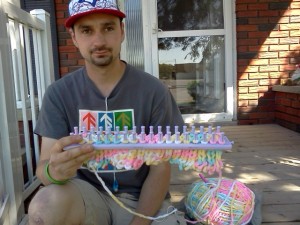 He learned how to knit this winter, taught by a kind staff member at his house, but traditional knitting was tough going, and painstakingly slow. A few weeks ago I bought him a sort of loom that he can knit with. He just finished his third baby blanket – a perfect size for a stroller or car seat – and he already has two expecting couples in mind who will receive blankets as gifts. He plans to sell the rest. 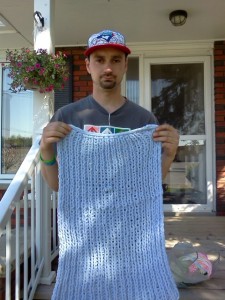 (Don’t you all fill my inbox with orders!!)

It’s hard for me to believe that this responsible young man is the same kid who, when I took over his care at age eleven, was picked up for school by a special bus that drove right up to the door every morning. Back then, I couldn’t even trust him to stand on the porch alone to wait for the bus. Now he has a paper route and a part-time volunteer job.

This is the same kid who purposely broke his toys within an hour of receiving them. Now he’s toting his beloved guitar across town and back without mishap.

This is also the kid for whom I despaired of ever finding an appropriate summer camp. Not only did I find a camp where he attended for many years, his experiences there set him up for an entire summer on staff at Fraser Lake Camp near Bancroft, Ontario last year.

The staff at the house where he lives have been absolutely amazing as they encourage Andrew to transition from boy to man. He’ll never learn how to read, write, or count money, but at age twenty-four he’s well on his way to relative maturity, and my heart swells with pride when I take a moment to remember how far he’s come.

He’ll never read this, so I must remember to tell Andrew on this Mother’s Day Weekend how he’s made me proud. Really, it’s the best gift any mother could ask for.

10 thoughts on “Andrew Does a Concert”