When we have typical early spring weather — bright, beautiful sunshine with a sharp, clear breeze — it makes me think of the games we used to play at school when the snow was finally gone and the weather started to warm up. One sure sign of spring in our schoolyard was skipping ropes.

The school provided long, heavy, woven cotton ropes that were just right for skipping as a group. The rope would start turning and we’d begin chanting, “All .. all .. all ..” continuing until everyone except the two turners had “jumped in”, and then we began the rhyme.

All in together, girls, such fine weather, girls;

When we call your birthday, please run out!

and each person would exit on their birthday. The game lasted until December — or until someone’s foot caught on the rope.

Because the boys played endless games of ball hockey on The Court, a piece of asphalt lined for volleyball and basketball, we girls were allowed to use the wide sidewalk at the front of the school for skipping — territory that was normally off limits. 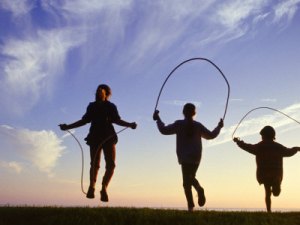 I had a little brother, his name was tiny Tim, I put him in the bathtub to see if he could swim.

He drank all the water, he ate all the soap, I took him downstairs with a bubble in his throat.

The ability to skip Double Dutch was really what separated the girls from the women, and I remember my elation at finally being able to jump into those fast double ropes without tripping. Sometimes we turned the Double Dutch ropes inward, which I thought was easier to jump, but I can’t remember what it was called. 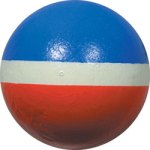 We also loved to play games while throwing a red, white, and blue-striped sponge ball at the brick wall and we’d chant the following words, with a throw, action, and catch between each one:

“ordinary, moving, laughing, talking, one hand, the other hand, one foot, the other foot, clap at the front, clap at the back, front-and-back, back-and-front, tweedles, twydles, curtsy, salute-sy, touch the ground, and — deep breath — away she goes!”

There were also games of “Donkey”, using a volleyball thrown against the wall, or hopscotch on one of several games painted on the pavement at one end of The Court. Hopscotch players needed sharp eyes though. Slap shots on the boys’ hockey net didn’t always go in!

One game unique to Hillside Public School was called “Stop”. I have no idea how it evolved, but it vaguely resembled baseball and was played on half of the volleyball court, using each of the four corners as bases.

A volleyball was lobbed to the “batter” who hit it with a closed fist, much like a volleyball serve. Like baseball, the player ran around the bases on a hit. But the ball was thrown in, not to a base, but to the catcher who would stand on home plate and yell “Stop!’ when they caught the ball. Any player not on a base was out.

Multiple players were allowed on a base at the same time, and stealing (or “sneaking” as we called it then) was allowed. With enough players on a single base, chains could be made so that a player who decided to “sneak” only had a few feet to run to the next base.

A teacher that we’ve stayed in touch with over the years said that he was never able to teach that game at other schools. They just didn’t get it. I’m not sure what that means exactly. Maybe that unusually good country air just created .. um .. unusual kids.

Whatever the reason, I’m glad I lived in an era when every rope, ball, and hockey stick wasn’t a weapon — real or suspected — and that rivalry and hard feelings were usually sorted out by the end of recess. What a gift.

6 thoughts on “All in together, girls; such fine weather girls …”