Take a  look at the picture below. What do you see? An expanse of grey clouds? A big machine? The demolition of a house? I see all of those things but most importantly for me, this pictures symbolizes the end of an era. 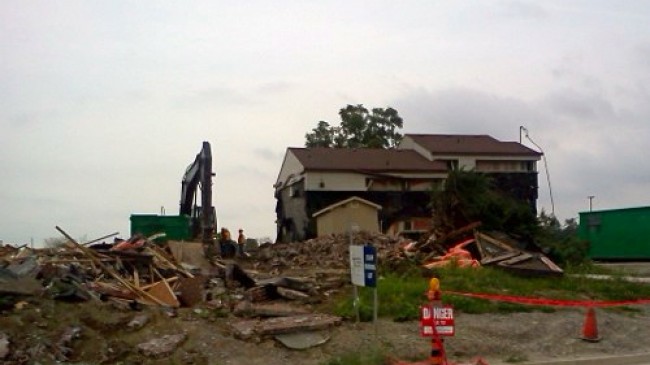 Forty-odd years ago when it was built, the building in the picture was one in a cluster of low units called High Point. They were connected to a center core by wide covered sidewalks, and each pod in this brand new facility had several home-like bedrooms and bathrooms. The central building housed the kitchen, dining room, and a large activity room.

This was the beginning of a very progressive time for those with intellectual disabilities and High Point was a giant step away from large, hospital-like institutions where many people with those kinds of challenges had lived. The only problem with High Point was that it stood all alone in a large field and the only close neighbour was a facility for those with heavy physical needs. It was a progressive building and concept, but completely cut off from the larger community.

About twenty years after High Point’s construction, the hospital where I work was built in a field right next door. Time passed and the nearby town expanded to become a small city that gradually surrounded High Point, the hospital, and the other facility.

With that passing of time the world became an even more enlightened place. In another giant step forward, private homes were purchased and residents of places like High Point were integrated into their local communities. Nearly fifteen years ago the last High Point residents moved out and the buildings were used by the hospital for offices and clinic space.

Many months ago construction began on an enormous addition to the hospital and most of the former High Point was razed, except for a couple of buildings used as a construction office. One day a few weeks ago, I was walking to the staff parking lot as the final buildings were being demolished. I took the picture you see above. Why? Because to me it signifies all that is good about life for our son Andrew.

Several months ago I wrote about Andrew who has an intellectual disability. Over the years he’s changed from a very, very challenging little boy into a fine young man, and I’m thrilled to say that the progress continues. When Andrew left our home four and a half years ago, he moved to a lovely house (group home)  in town. The home was staffed 24/7 for those with disabilities greater than Andrew’s, but he shared a downstairs suite with another gentleman and so he had some time and space to himself.

Over the next three years, wonderful and patient staff members taught Andrew life skills to an extent that I never would have. Despite figurative bumps and bruises along the way, he progressed by leaps and bounds and we watched with thankful amazement.

Fifteen months ago Andrew moved across town to another house — a place that would give him more independence — with staff on-site only during the day and evening. He went from having a paper route and a lot of free time, to a volunteer job at a thrift shop run by the local hospital auxiliary ladies. He works there three mornings a week and he’s done such an outstanding job that he now has a key. On days that they’re closed, the ladies depend on him to check around the back door of the store and take items inside that haven’t been put into the donation bins. He’s often the first guy there in the morning because he likes to open up, and his efforts are amply rewarded with homemade muffins and butter tarts! All that, and he still keeps up with his large paper route.

Now Andrew is embarking on the move of his life.

See this house? You wouldn’t think twice about it if you drove past, would you? 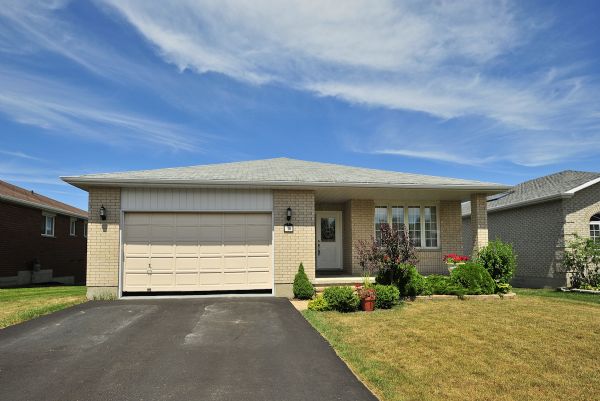 Neither would I. It blends perfectly into the subdivision because this house is exactly what all the rest in the area are. It’s a home. But for us, it’s a special home because this is the Community Living house where Andrew and two other young men will move very shortly. (NOTE: They moved in November 2012). All things being equal, this is where they may well live for the rest of their lives.

They are independent guys now, and they’ll have on-site staff for only six hours a day, although all of their activities, appointments, and “paperwork” will be fully supported. Andrew will take his own medications, get himself to his job, and continue to get around town as needed. Because all three are able-bodied fellows, the lawn-mowing and snow-shoveling will fall to them, just as it does to anyone else living in a private home.

To say that Andrew is excited about his new home, and that we’re pleased and proud, is putting it mildly. He still can’t read, write, use cash, or do mathematical calculations, but alternate tools to ensure his success have been put into place and he knows how to use them.

Congratulations, Andrew, and thank you, Community Living. We’ve come a long way since High Point days, and we look forward to many happy years for these three handi-capable young men in their beautiful new home.

8 thoughts on “And the Walls Came Tumbling Down.”