We recently made the long drive from our home near Toronto, Ontario to visit our grandson in Virginia. We also went to see his parents.

Because we don’t get to spend a lot of time with almost-four-year-old Nolan, I try to make our short visits fun. One morning when he woke up he wasn’t ready for breakfast so I asked if he’d like to pack breakfast into his backpack and we’d go on an adventure. He thought that was a great idea, but only if he could bring his drill.

We headed out, Nolan on his bike and me walking. Because Daddy is a university student and Residence Director, they live in a pretty apartment on campus. It’s a great place for a little guy to ride his bike. 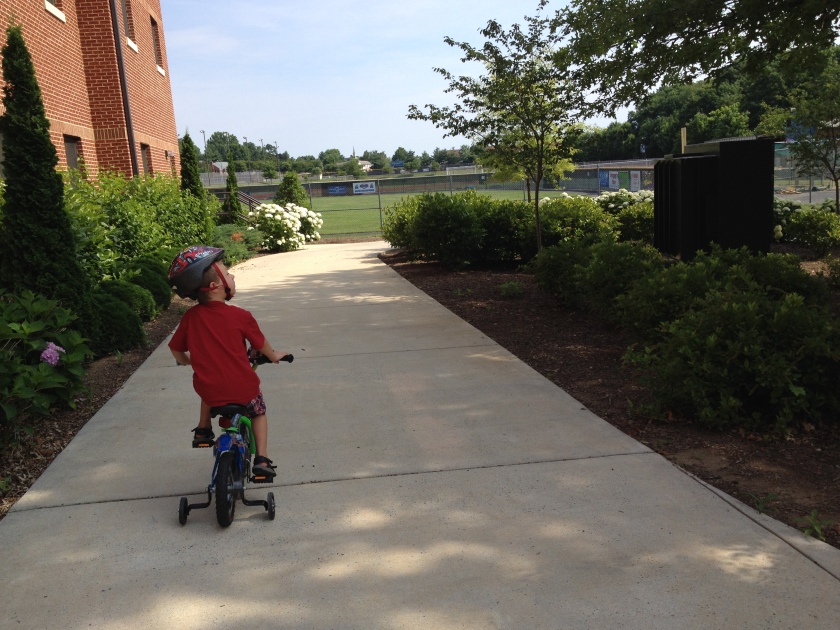 Off we went, heading down wide sidewalks and across roads and parking lots, until we found just the right place to eat breakfast in the shade of a big tree. Of course, we unpacked the drill too.

The view from our breakfast spot was superb. Nolan wanted to go swimming in the fountain after he ate, but we just dipped his feet instead.

After Nolan finished his PB & J sandwich, we decided to get on with our adventure. First, he wanted to go to the sandbox. The sandbox? For university students?? I didn’t understand until we got there.

Too bad the bucket and shovel were still at home. Nolan covered up my toes instead.

A nearby building was under construction and Nolan noticed some green flags, all in a line.

He asked if he could pull them out and play with them, but I explained they were marking the spot where a pipe ran under the ground. He went back to the sandbox and dug in his toes. “I don’t feel the pipe,” he said. 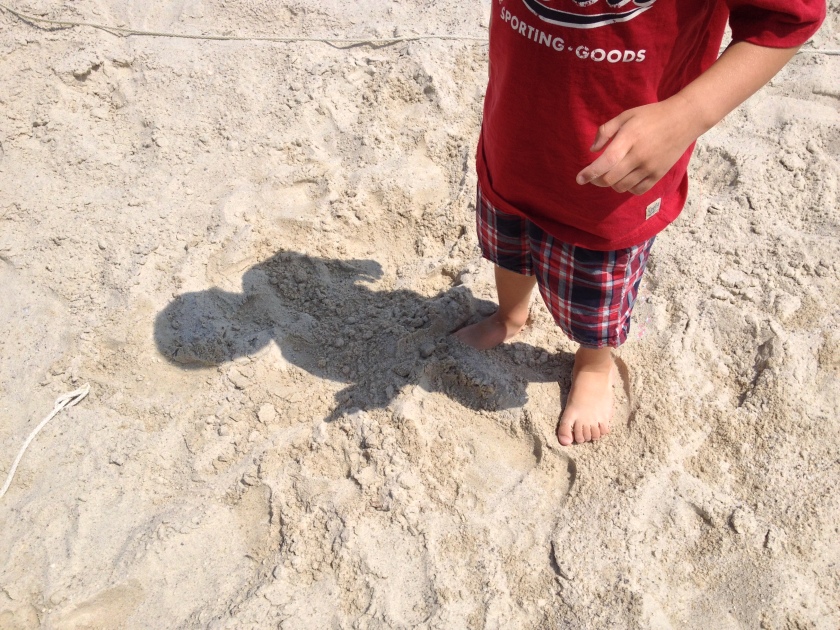 We were getting hot, so Nolan sat down and had a cold drink.

We were sitting right beside the art building and while he was resting we noticed something very funny in the concrete. I didn’t know what it was, but Nolan told me that it was a nest for one very large bird, or maybe for lots of small birds. 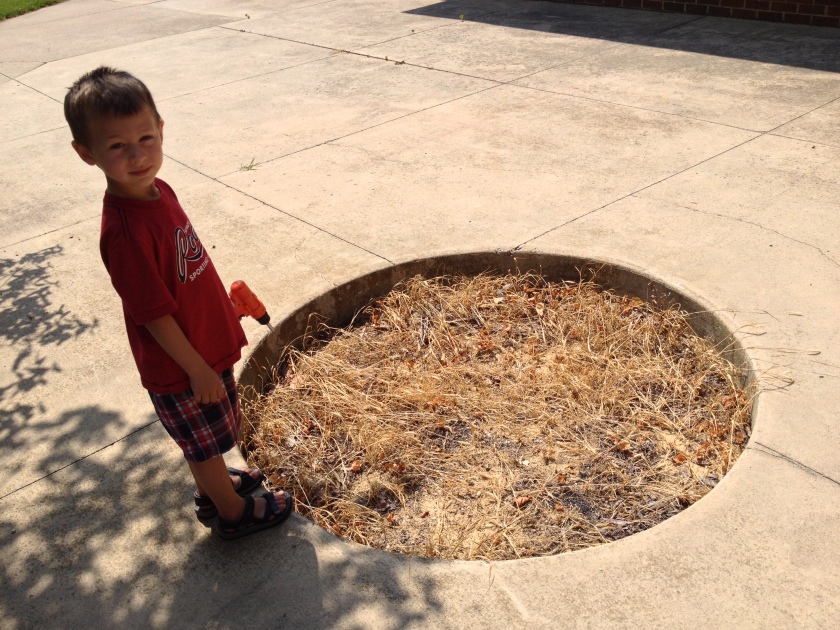 Next on the list of places to see was The Cave, so Nolan hopped on his bike and pedaled away, leaving me in his dust. 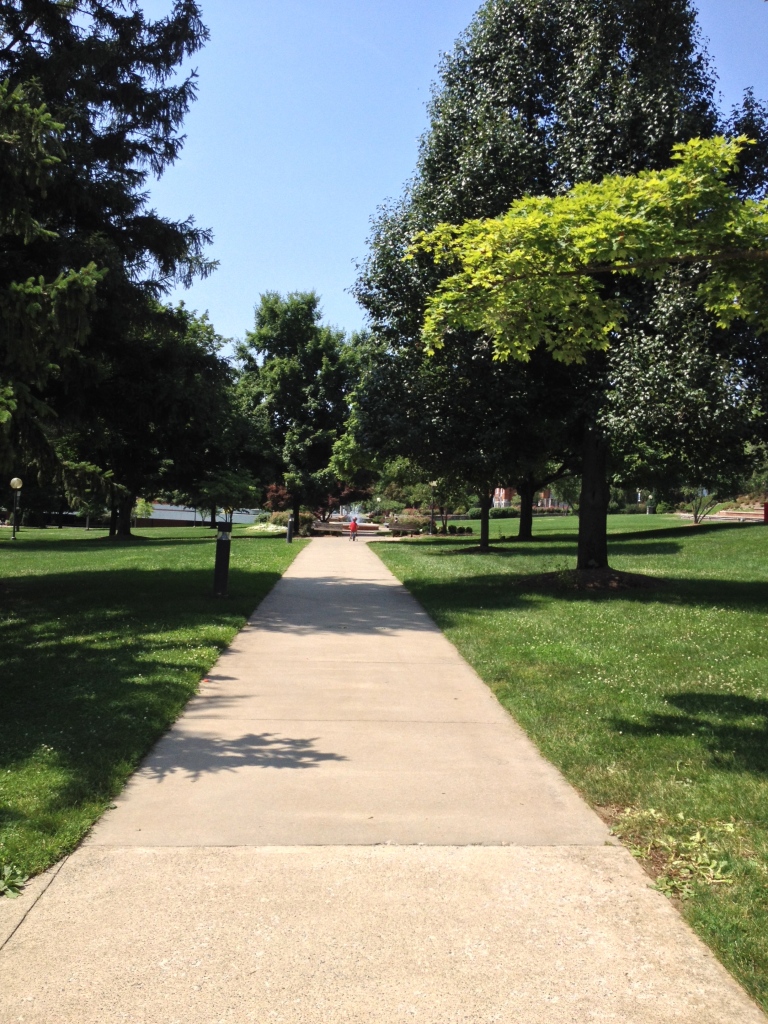 The Cave is a special spot created by a walkway to the library. It’s shaded and cool, and the perfect place for little boys with big imaginations to play.

First, Nolan decided to drill in the stones. It worked very well because the drill actually went down between the stones, just as if it was making a real hole. He was thrilled.

Next, he added fuel to the campfire.

And then he told me he had to drill for samples all around the large rock.

Apparently that operation wasn’t successful, so we decided to collect samples of leaves, seed pods, and flowers instead.

We spent a long time playing in the cave, but then it was time to go home. Nolan biked on ahead. He was going very quickly down a long, long hill that would eventually take him to a busy road, so I called out “Stop!”, and he did. Do you know how excited a four-year-old boy can get when Nan points out that he’s laid a patch? The rest of the walk home took a long time as he tried to do it again and again.

When we finally got back, we put all of our samples into water so Mommy could keep them. We even found a big leaf. Nolan told me it was a Maple leaf. True Canadian, my boy. 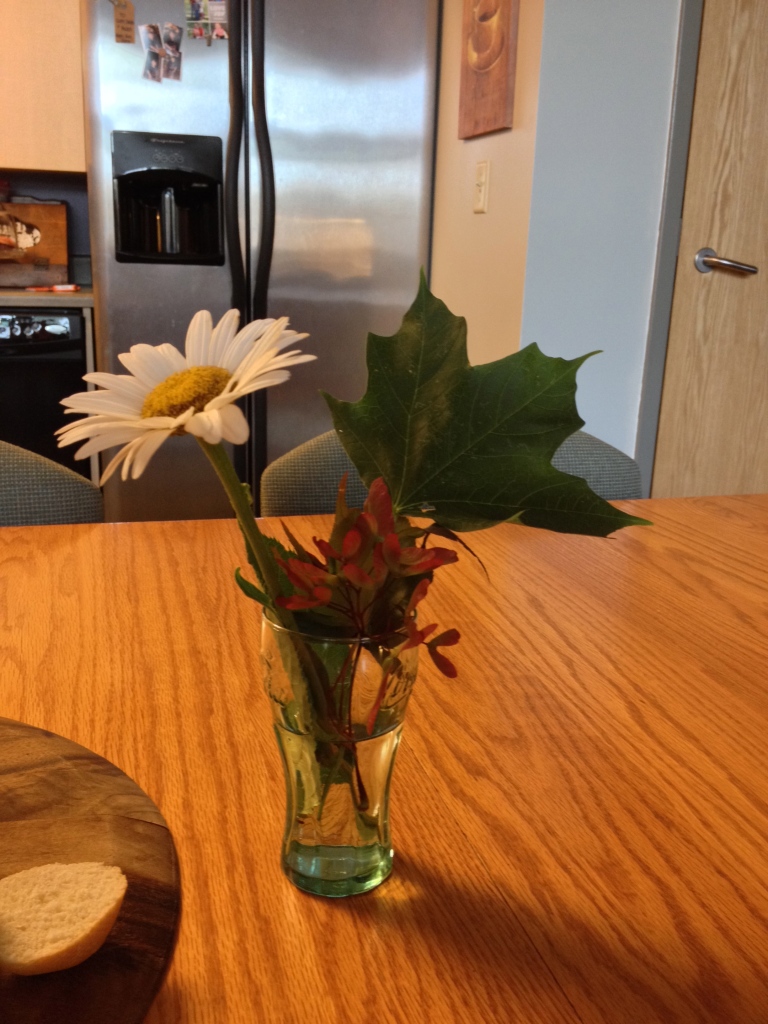 I thought our adventure was finished, but there was something even bigger in store for us the following day. I had packed a cardboard airplane kit and tempra paints, with the thought that we could make and paint it together. The plane fit together like a big, slightly more complicated, banker’s box.

While I watched, Pop helped him paint it, and then we added buttons. I painted blue buttons on the dashboard so he could start the plane and make it go fast. We painted two more blue buttons on the outside, one on either side, to make the rescue stuff work. On the back of the plane we painted a red hook. Nolan said he needed a hook in case a car fell into the ocean and he had to pull it out. We also painted many flames on the outside for extra speed.

And then the fun began. Nolan stepped into the plane, grabbed hold of it (see hand-holes under his left arm, above) and started running around. “I need a rescue adventure,” he said.

Fortunately, Daddy had walkie talkies in his office and he gave one to Nolan, then went inside. A minute later, Nolan’s walkie talkie crackled and a voice said, “Daddy to Nolan. Daddy to Nolan. A car has fallen into the ocean and it needs to be rescued. Please hurry. This is an emergency.”

I showed Nolan how to press the talk button. “Nolan to Daddy. I’m on it,” he said, and off he ran.

Over the next half hour, the plane got a workout, the red hook and the blue rescue buttons got a workout, and so did Nolan’s little legs. There were plenty more rescue operations, always called in by Daddy. A giraffe and an elephant were unstuck from a swamp, and several more cars were pulled out of deep water.

Eventually, a reluctant rescue pilot had to stop for dinner, and afterward we went out for ice cream. When we got home a couple of hours later Nolan headed right for the plane, now sitting on top of his little picnic table, and climbed right in.

“Emergency! Emergency!” he said. “This is Nolan in the rescue plane. I’ll be right there.” And off he soared into the evening skies on his biggest adventure of all.

One thought on “A Breakfast Adventure”