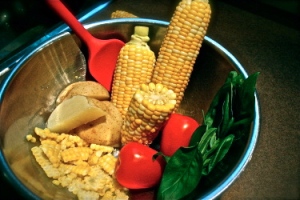 This afternoon I was cutting corn off the cob so I could make a nice summer salad. We’re at the tail end of a very hot, very humid stretch of weather right now and the corn/humidity combo made me think of the food I grew up on. Back then, my mother either froze or canned every bite of food we ate. I have no idea how she, and most other women back then, managed to do this, but that’s how it was.

There were so many delicious things in the freezer and on the long shelves lining the basement. Here’s what I can remember, but I’m sure there was more.

This astounding feat was accomplished by my mother, alone at first, and then with the help of her daughters when we got a bit older. I’d often wake up in the morning and see bushels of peas or beans sitting in the shade of our two big chestnut trees, ready to be podded or snapped after breakfast. While we worked we played “I Packed My Trunk” or “Twenty Questions” to keep  us older ones entertained while we worked, and the younger ones played nearby. Sometimes we were excused from our jobs before we were quite finished. I’m sure it’s because we whined about helping and to mom’s ears it probably sounded like the stationary equivalent of, “Are we there yet?”

But the podding and snapping was only the beginning of mom’s work.Vegetables had to be taken into the kitchen, blanched in a pot of boiling water for a few minutes, and then plunged into cold water before being put into plastic freezer bags. Repeat, repeat, repeat … a few cups of vegetables at a time.

Peaches also had to be blanched so the skins would peel off easily before they were pitted and packed into jars. The jars filled a canner so big it covered two burners on the stove, and there they boiled for a long, long time. Tomatoes had to be prepared in the same labour-intensive way. Jams could only be made one small batch at a time, with constant stirring while it cooked.

So, where am I going with all of this? The corn. In my memory, corn days were always hot and muggy. Bushels and bushels of corn were picked from the garden and husked. Then the cobs were put into large pots and blanched for several minutes. After that, the ‘fun’ part began.

Grandad and Granny, and my Great-Aunt Ada, who lived on the farm with us, plus children who were finally old enough to be trusted with sharp knives, sat outside in lawn chairs, with large wash pans in their laps, and the messiness began.

A cob of corn was held in one hand. With the other hand, the knife was moved in a sawing motion toward the cutter, removing several rows of corn at a time. Then the dull side of the knife was run down the sheared area, away from yourself, to remove juices and little pieces of corn still clinging there. The cob was given a bit of a turn and a few more rows were cut off, and so on.

On and on the process went, and the cutters were soon covered in bits of corn and sticky juice. If you wore glasses it became nearly impossible to see through them after awhile. One lucky person took the full pans of corn into the house and filled plastic freezer bags. That was a clean job.

By the end of a canning or freezing day, the house was hot and steamy and I’m sure my mother felt bedraggled. Somewhere, in the extra hours of the day, she also managed to prepare three large meals for my farmer father and get laundry and cleaning done.

By comparison, my life is a cakewalk. I’m sitting in a comfortable air-conditioned house as I write. I can put up fruits and vegetables if I please. If not, I buy them. I go to a nice job in a clean environment, and when I’m not working I can mostly fill the hours as I choose. 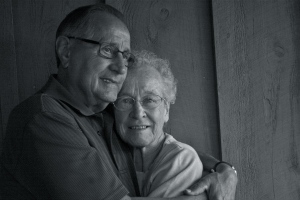 I hadn’t started out to say this, but hats off to my parents and all the others, who through generations past, worked hard to feed their families in such a wholesome way, simply because they had no other choice. It really wasn’t easy, but it sure tasted good.

6 thoughts on “Putting Up”