I wrote the title to this blog about a week and a half ago, but that’s as far as I got. Now that the pictures are uploaded, I can show you what a wonderful visit Noah (6) and I had when he came for a sleepover. He loves to go into the forest that surrounds our house so we can discover things, so after we finished breakfast that’s what we did.

The first thing Noah did with the binoculars is turn them wrong-way around so he could check out his boots.

Then we walked across the yard to look at a little toad hole we’d seen the evening before in the roots of a big old stump. The hole was still there, but Mr. Toad wasn’t around. Just some fungi he’d been sitting on.

On the other side of the stump we found a small, pale blue eggshell …

… so Noah climbed up on the big stone nearby to see if he could find the nest where the shell had fallen from.

Stella waited around for awhile, but then she headed into the forest on her own.

When we were finally ready to join Stella, Noah took his binoculars to see if he could find her. 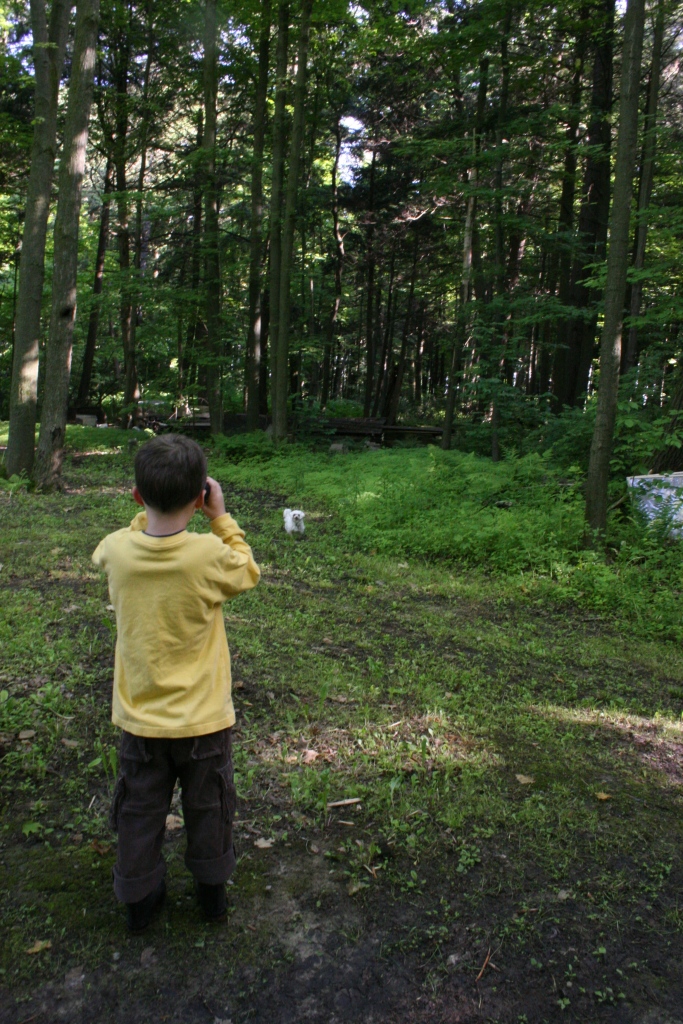 Together, the three of us decided to follow a golden pathway made by the morning sun. 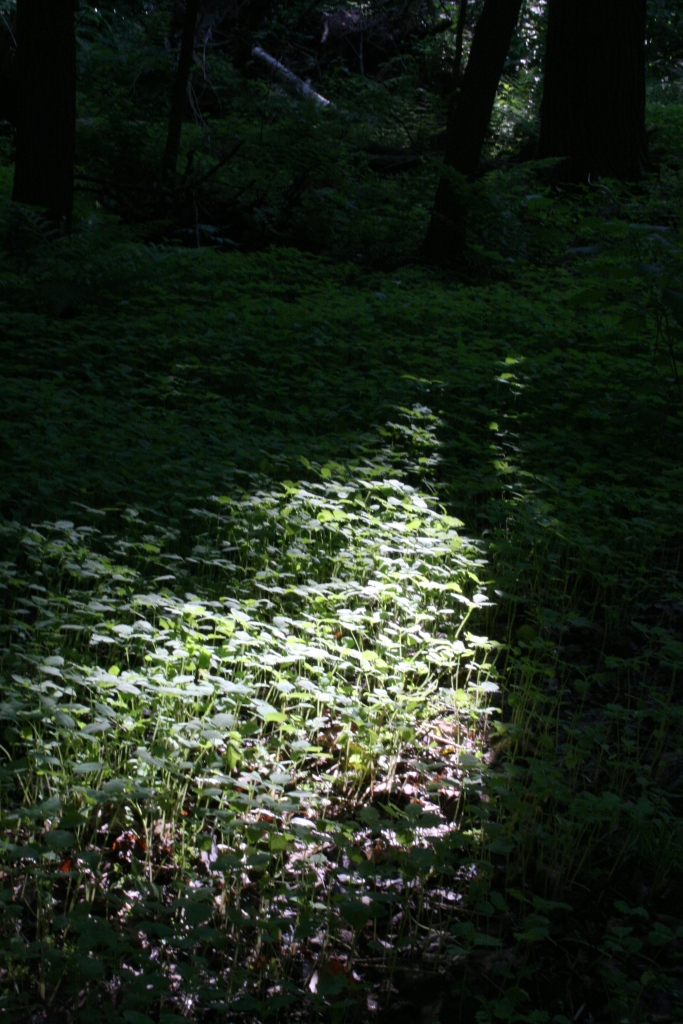 Unfortunately, the mosquitoes were so bad we decided to try a different exploration. Although Noah has never seen it, there is a big lake a short walk from our house, so we set out to discover that.

The walk to the lake goes down a big, big, long, long hill. This isn’t even half of its length. Going down was easy.

We stopped to look at a dove sitting on the power line. Binoculars come in handy for things like this. 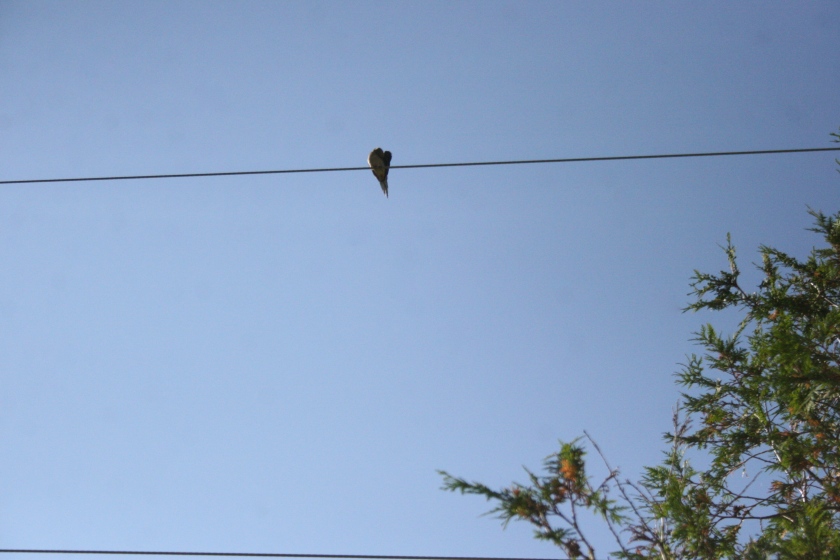 We saw some pretty flowers …

… and we saw an animal running into the thick cedar woods that border the road. Noah thought it was a fox. Golden retrievers have occasionally been mistaken for foxes by small boys.

We picked little pieces off red clover and sucked out tiny bits of nectar.

We also looked at the little sumach seeds and compared them to the big, dry brown seed cones left from last year.

All the exploring took quite a bit of time, but we reached the lake at last. It’s the reedy end of a very big lake, but it didn’t take Noah and his binoculars long to discover two swans floating together on the far side.

We checked out the bulrushes, the shallow water, and the algae, and then we turned toward home. We knew it would be a long hike back up the hill.

Then, to our surprise, we discovered a pet owl in the backyard of the house nearby! “He’s a fake,” Noah told me. “But he looks pretty real.”

The trip back up the hill was slower, and I had to take Noah’s hand for part of the way because he was sure he couldn’t make it. The long trek was worthwhile, because when we were nearly home we discovered a few more things: 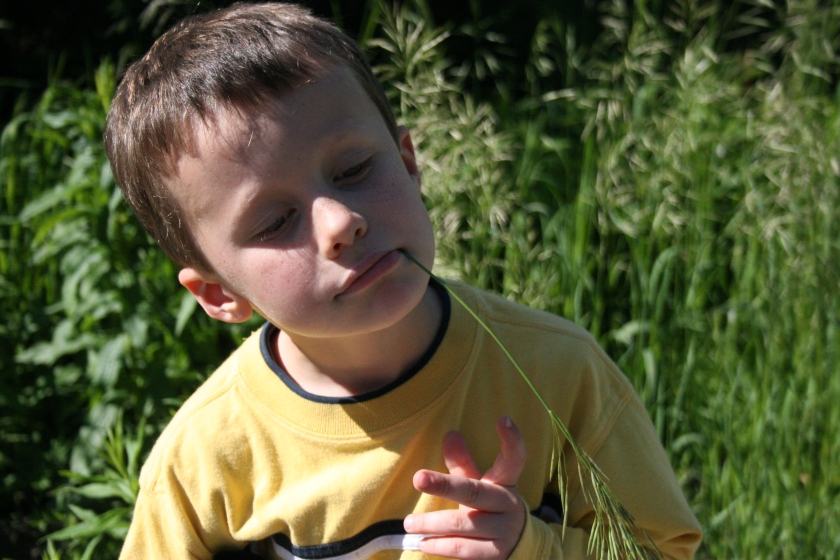 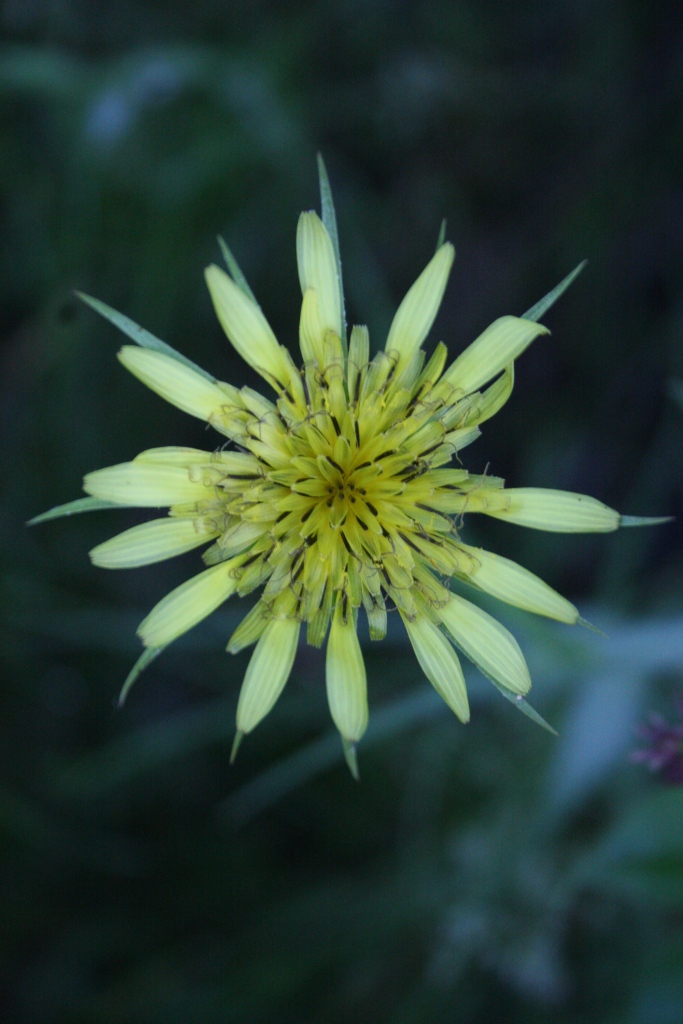 and some wild strawberries that grow at the end of our driveway. No blossoms this year, for some reason, so no berries either.

It was starting to get quite warm by the time we got home, so we were happy to get back into the shade.

I was ready to hang up my hiking shoes, but Noah was anxious to keep going. On the back porch we found a slug who had left a silvery trail on the concrete. I guess slugs don’t know about taking the most direct route between two points. 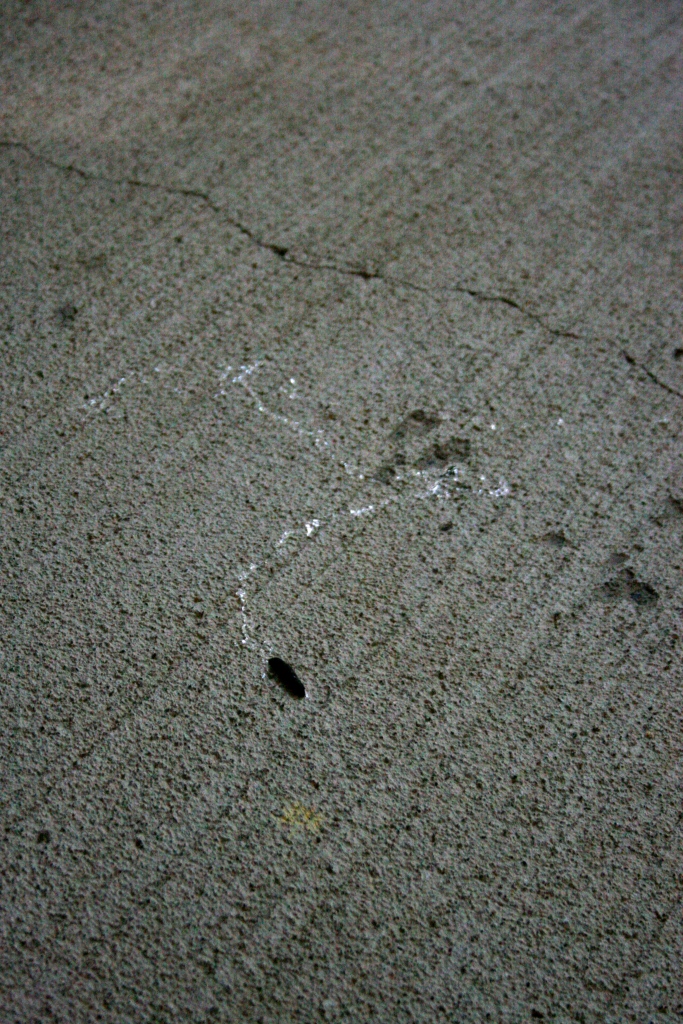 And last of all, Noah discovered an Emerald Ash Borer. We’ve seen these gorgeous, nasty, little bugs before, and Noah and I have looked up pictures of the damage they do to ash trees.

Noah has been trying and trying to think of ways to keep the bugs away from trees. Last week he thought that coating all the trees in lemon juice might make them taste too awful for the bugs to bite into. This time, he came up with the best idea ever. If we can get one skunk stationed beside each ash tree on our property and train them to spray the bugs when they land, then we’ll have the problem licked. I think that just might work. Don’t you?