Do you know the singer Sara Bareilles? I didn’t until my 9 yr. old grandson Nolan started talking about her a year or so ago. He was excited to share some songs with me so we checked out YouTube. Now I’m a fan too.

According to Wikipedia, “Bareilles is an American singer-songwriter and actress. Her 2007 hit single “Love Song” reached no. 4 on the Billboard Hot 100 chart.

“Bareilles has sold over one million albums and over nine million singles and downloads in the United States and has earned seven Grammy Award nominations, including one Album of the Year nomination for The Blessed Unrest (2013).“

Sure, it’s Wikipedia, but I’ll bite. Seems like she’s a bit of a Big Deal, but big deals on stage and screen are a dime a dozen. What’s more rare are Big Deal people who can act like Small Deal people in spite of their success. That’s when magic happens.

Nolan has a great life. He has parents who love and support him, a cool bunk bed room, a ton of Lego, and a pretty cute puppy named McGriff. He has a big and tender heart, and maybe that’s why bullying, a learning challenge, and a dearth of friends, left his self-worth shattered.

During a particularly rough time his parents, Scott and Sarah, loaded an old iPod with music. Nolan used it on bus rides home from school to tune out hurtful words and cocoon himself in a positive space. It didn’t take long until they realized he was listening almost exclusively to Sara Bareilles. In the words of her songs he seemed to find respite, relaxation, and confidence.

To Nolan’s delight, his parents recently purchased tickets for a Sara Bareilles concert in D.C., not far from their home. He was excited as the time drew near, and when his dad took him to school on the morning of the concert, Nolan confidently stated, “This is going to be a great day!” At that point neither of them knew exactly how great it would turn out to be.

Not long after the drop-off Scott hit on a plan that has turned out to be the high point of his parenting career. Thinking fast, he made a stab at what might be a work email address for Ms. Bareilles, telling her a bit about Nolan’s story and asking if they might be able to meet at her concert that evening. And then, fingers firmly crossed, he launched it off into cyberspace.

There was no response until, driving to the concert, he glanced at an email alert. Lo and behold, it was a reply from Sara’s manager. He handed his phone to wife Sarah and as she read the note her eyes got big and a smile grew on her face.

They decided to tell Nolan right away, to give him a bit of time to absorb the fact that he would be meeting his singing hero. He could hardly believe it, thanking his dad over and over for the unbelievable gift.

Sure enough, back stage passes were waiting for them, and, surprisingly, they were the only ones to meet with Sara B. before the concert. She asked how old Nolan was, what grade he was in, and what he was learning at school. They talked about the different subjects but ended up agreeing that he would do the math he loves, and she would take care of music. The calm atmosphere of a one-on-one conversation made the time even more special for him. 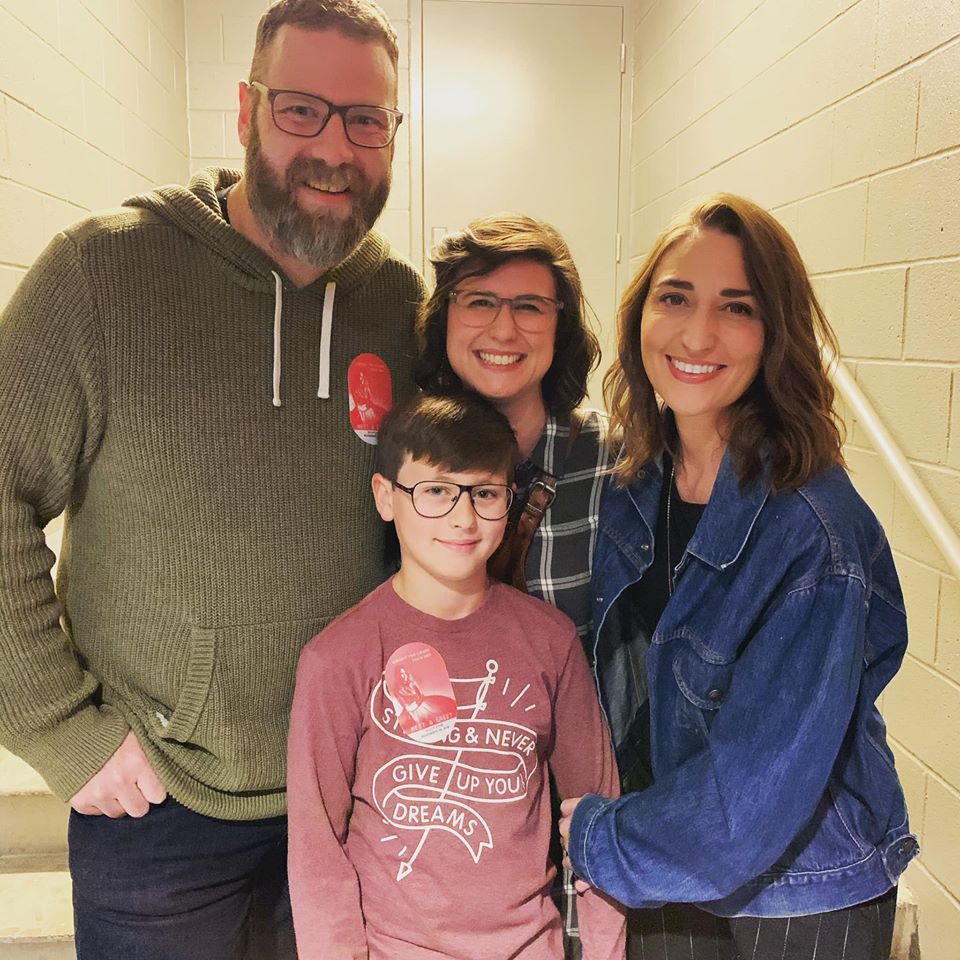 When they were alone again, Nolan hugged and hugged his parents, thanking them over and over.

But his evening was just beginning.

Partway through the concert, Ms. Bareilles introduced her next song: “My friend Nolan is in the crowd tonight. He’s nine years old, and this song is dedicated to him.”

Although Scott missed the first few words on video, Nolan jumped out of his seat and pointed at himself because he thought Sara could see him from the stage. He waved as though he was accepting an award and everyone was cheering just for him. It meant so much that his Sara Bareilles said, “My friend Nolan”.

The next day when Scott showed Nolan this post from Instagram, Nolan lit up all over again.

I’m glad he’s nine now, and old enough to remember this experience. As things are starting to go well at school, the positive boost from his friend Sara Bareilles will help move things forward. A few minutes out of her day left a life-long impact on our boy Nolan.

3 thoughts on “Dear Sara Bareilles: I hope you read this some day.”