A friend’s recent Facebook link got me thinking about the days when we had a stand at the St. Lawrence Market in Toronto. When I was young, my grandparents went to the market every Saturday and I looked forward to their return.

When I was seven or eight, Granny allowed me to go with her and Grandad to the market for the first time. Their stand was in the north market, and in those days it was a vast building with soaring ceilings and drafts everywhere. Granny kept a little kerosene stove behind their stand for warmth, and I’m happy to have that little heater now.

When I was ten, my Granny got sick. All winter she was unwell and was unable to help Grandad with their usual work. That meant that when my sister Linda and I got home from school, we’d be asked to help Grandad grade eggs. Although we didn’t enjoy the chore, there was no choice but to do it.

Granny was too sick to attend market so my cousin Paul and I went in her place. Then, in the spring, when I was ten-and-a-half, she died. Going to the market with Grandad and Paul, knowing that Granny would never go back again, was so hard.

Shortly after that, the old north market was demolished and vendors set up stands in a parking lot beside the construction site. Grandad made a frame out of iron pipe that hooked onto the wooden racks enclosing the back of his truck, and it supported a canvas roof. Our stand was made of folding tables, and customers strolled the rows of makeshift stalls in the open air.

One Saturday morning we opened the back of the truck and two bright eyes greeted us. My

curious calico kitty, Kiss Cat, had gotten locked into the back of the truck! Grandad made a harness out of twine and we fastened it to the side mirror of the truck. All day I worried that Kiss Cat might escape.

We had eggs to sell, of course, and each week we took a large stone crock of apple butter made from autumn’s windfalls in the orchard. We also took chickens that we’d caught and plucked the day before. Plucking chickens was my least-favourite job when it came to weekly market preparations.

Fridays in the spring and summer are among my best childhood memories. Memorable, but not so enjoyable, were long afternoons spent “peeling onions”; removing the dirty outer skin of two wheelbarrow-loads of slim green onions. We kids peeled, and then Mom bunched them, slipping on the rubber bands before putting them into pails of water to keep fresh.

Springtime also meant accompanying Mom to pick wild violets, which were tied into small nosegays and sold at the market the next day. We girls had a long row of pansies that became quite a chore to pick and bunch, but the money from those was ours to keep.

In the early spring we’d go with Dad or Grandad to our bush lot, a mile down the road, to dig Marsh Marigolds / Cowslips which were put into newspaper-lined wooden flats. We also picked fiddleheads.

When the large grove of lilac trees growing at one end of our was in bloom, Dad would go out after supper to cut sweet-smelling branches. Tall buckets filled with water held the lilacs and their moist fragrance filled the evening air. 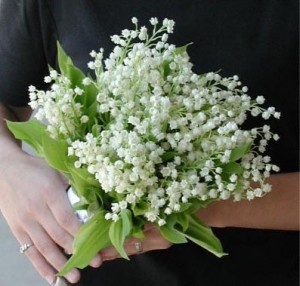 Grandad would sell for them. I mostly remember the wonderful scent of lily-of-the-valley bouquets brought by my aunts, and the poor bunnies raised by a neighbour boy. They arrived dressed and ready for sale, and I stroked their soft fur while mourning their early demise.

During the summer we girls had to pick strawberries or raspberries. We didn’t like bending or squatting to pick the strawberries, but at least the berries were big and the baskets filled quickly. Our raspberry bushes grew in a long, long row at the foot of our yard and I hated this job because it seemed endless. A string was threaded through a square, wooden quart box and tied around our waists. Several other boxes were stacked in the bottom one, and the berry-picking began. Quarts of raspberries took much longer to pick, and the canes were scratchy. When a box was full, we placed it in the shade of the row and started picking into the next box. 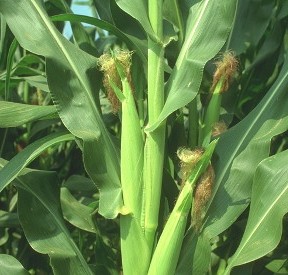 There were also peas, beans, cucumbers, tomatoes, radishes, beets, carrots, and other fruits and vegetables in season. I was excused from picking sweet corn though.  I was so allergic to the corn pollen, that being in the field set me to wheezing and my eyes watered and swelled half shut. I would have rather picked corn!

In the fall Grandad brought in colourful piles of pumpkins and many kinds of squash.

It was with this bounty that we set out each summer Saturday morning, eyes bleary after being awakened at 4 a.m. But it was a magical time too as we drove the nearly-deserted 401, from where we entered it at Morningside, and then down the Don Valley Parkway.

When we arrived at the market, we drove the truck inside and right up to our stand to

unload everything. The man at the stand next to ours kept an eye on things while we went to have breakfast at a small restaurant nearby. Grandad always sold a case of eggs to the restaurant guy, and then we ate. Bacon sandwiches and hot chocolate have never tasted as good.

We worked hard all morning, and the stand gradually emptied. By lunch time we girls were ready to accompany our good friend, Noreen Clarke, to another little restaurant for lunch. When we returned it was Grandad’s chance to have a break and we felt very important when we manned the stand alone.

We rarely took much back home with us, and Grandad always treated his girls to a Dairy Queen at Lawrence and Victoria Park. In those days you could choose from chocolate, butterscotch, or cherry dip, and I always had cherry.

I’m sorry that this story is quite long, but there’s so much I’ve left out and so much more I could say. It’s been a wonderful trip down Ye Olde  Memory Lane for me, and I hope you’ve enjoyed coming along.